Welcome to the Parliamentary Internship Programme!

Why be a Parliamentary Intern?

PIP interns are fully immersed in Hill life. They are mentored by past interns and friends of the Programme who teach them practical skills that are useful for work in Parliament and government. The interns also receive training on research methods, participant observation, social media, communication, project management and delivery, workplace issues, and protocol. They develop an unparalleled network.

In the office, the interns help MPs by writing statements and questions for Question Period, assisting with media interviews, drafting correspondence, letters to ministers, briefing notes, op-eds, and papers, researching committee witnesses, and preparing Private Members Bills and Motions in consultation with expert procedural clerks. They assist MPs in committees and shadow them in meetings with colleagues, media, departmental, interest groups, and community representatives. Many also visit constituencies and contribute to town hall meetings and outreach projects in the riding. 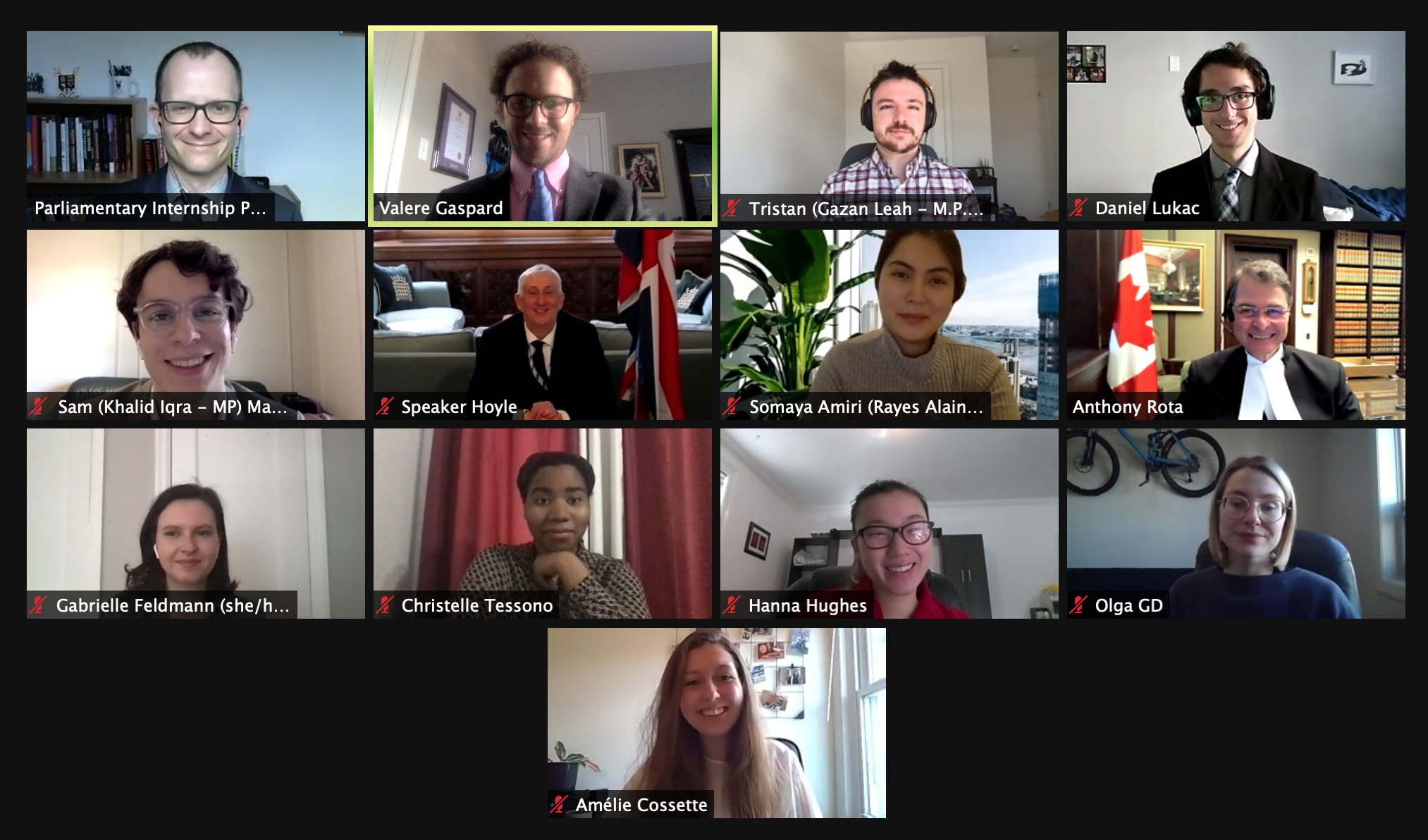 Orientation
At the start of each year, the Director and the House of Commons organize an intensive two-week training period in September. It consists of seminars with staff of the House, scholars, journalists, senior public servants and other experts. This orientation helps provide an understanding of how the House of Commons and the government are structured and the role of MPs and their offices.

Comparative Legislative Study Tours
Comparative study tours to provincial and territorial legislatures and assemblies outside Canada give the interns new insights into democratic government and the function of political institutions. The interns organize the visits themselves and produce detailed reports on their experiences. In addition, PIP hosts interns and fellows from other legislatures, giving PIP interns an opportunity to learn about provincial politics and compare experiences with keenly interested colleagues.

Seminars
In the fall and winter, the ten interns participate in seminars taught by scholars, focused on the institutions and actors that shape Parliament. These seminars take place weekly during a three-hour “PIP Caucus” on Wednesday mornings, and cover a range of issues. Among the issues covered include Canadian politics following the Truth and Reconciliation Commission, media and contemporary politics, and political parties and advocacy groups.

The interns also attend scholarly events such as the Administrators’ Colloquium and talks organized by the Canadian Study of Parliament Group.

For a full overview of the many parts of the Programme and expectations for interns, please see the Intern Employee Handbook.

Beginning in 2023-24, the Interns will receive a salary of at least $35,000 for the ten month period (September to June). The Programme also pays a significant percentage of interns’ moving costs as well as their travel, accommodation and per diem costs during comparative study tours to Québec City, Brussels, the United Kingdom, Washington, and Iqaluit.

Interns receive no social or medical benefits. The demands of the Programme make it impossible for interns to accept outside employment during the internship.